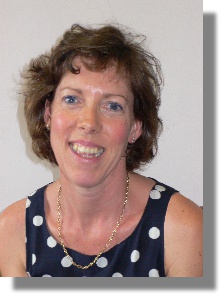 Very much in need for a change of scene by then, she then went on to spend a year in New Zealand working in a hospital in Wanganui. This was accompanied by some exciting travel before returning to the U.K. to spend six months doing Accident & Emergency medicine in Cheshire.

She went on to complete her GP training during the course of which she met and married Richard and has since had several children.

Her General Practice experience has been gained in Stratford-upon-Avon, Basingstoke, and now Redditch. She joined the Dow Surgery as a Retainer part-time doctor, and went on to become a partner a year later.

In spite of vowing never to do any more examinations following her Under-Graduate training, she has passed the Diploma in Child Health, the diploma in Obstetrics and Gynae and the Royal College General Practice exam.

She enjoys cycling ,swimming and walking and is a member of a health club to help stay fit. Her other interests include reading, music, gardening and travel.